Past. Present and Future 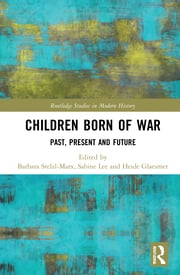 This volume presents research from an international, interdisciplinary, and intersectoral research project in which 15 doctoral researchers explored a range of issues related to the life-course experiences of children born of war in 20th-century conflicts.

Children Born of War (CBOW), children fathered by foreign soldiers and born to local mothers during and after armed conflicts, have long been neglected in the research of the social consequences of war. Based on research projects completed under the auspices of the Horizon2020-funded international and interdisciplinary research and training network CHIBOW (www.chibow.org), this book examines the psychological and social impact of war on these children. It focusses on three separate but interrelated themes: firstly, it explores methodological and ethical issues related to research with war-affected populations in general and children born of war in particular. Secondly, it presents innovative historical research focussing specifically on geopolitical areas that have hitherto been unexplored; and thirdly, it addresses, from a psychological and psychiatric perspective, the challenges faced by children born of war in post-conflict communities, including stigmatisation, discrimination, within the significant context of identity formation when faced with contested memories of volatile post-war experiences.

The book offers an insight into the social consequences of war for those children associated with the ‘enemy’ by virtue of their direct biological link.

1. Children Born of War: A Critical Appraisal of the Terminology
Sabine Lee and Heide Glaesmer

5. Researching Children Born of War in Uganda: Methodological Reflections on the Inclusion of Minors in CBOW Research
Eunice Akullo and Boniface Ojok

7. Addressing The Needs Of Mothers And Their Children Born Of Conflict-Related Sexual Violence: A Framework For Support In Psychosocial Settings
Kimberley Anderson

11. Children as “Collateral Damage” of Nationalisation Campaigns? The Persecution of “Nationally Unreliable” Persons in Czechoslovakia after the Second World War
Michal Korhel

12. Representations of CBOW in Films of Soviet Occupied Latvia and Beyond
Oskars Gruziņš