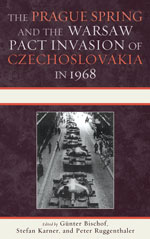 On August 20, 1968, tens of thousands of Soviet and East European ground and air forces moved into Czechoslovakia and occupied the country in an attempt to end the “Prague Spring” reforms and restore an orthodox Communist regime. The leader of the Soviet Communist Party, Leonid Brezhnev, was initially reluctant to use military force and tried to pressure his counterpart in Czechoslovakia, Alexander Dubček, to crack down. But during the summer of 1968, after several months of careful deliberations, the Soviet Politburo finally decided that military force was the only option left. A large invading force of Soviet, Polish, Hungarian, and Bulgarian troops received final orders to move into Czechoslovakia; within twenty-four hours they had established complete military control of Czechoslovakia, bringing an end to hopes for “socialism with a human face.”

A dozen leading European and American Cold War historians analyze this turning point in the Cold War in light of new documentary evidence from the archives of two dozen countries and explain what happened behind the scenes. They also reassess the weak response of the United States and consider whether Washington might have given a “green light,” if only inadvertently, to the Soviet Union prior to the invasion.

“The 1968 Prague Spring and the Soviet invasion of Czechoslovakia it provoked are widely recognized as pivotal events in the Cold War’s watershed year. What their consequences have been for the remainder of the global conflict and beyond, however, is more difficult to tell. This book goes further than any other in trying to answer that question by bringing in an impressive amount of new scholarship that should allow us to judge.”

„The detail of negotiation in the ideological Cold War context is fascinating in these universally well-written/translated essays. Indispensable for any library with even a bare-bones Cold War recollection … Essential.“

„Of the many books that have been trying to look at the 1968 Czechoslovak crisis from different perspectives, this is the first one to do so in a balanced way while using substantive new evidence as well.“